Harrisburg, PA – October 19, 2016 -Andrew Kocher was just hoping to have a couple of clear rounds in the $10,000 Dash for the Cash at the Pennsylvania National Horse Show, presented by The Lindsay Maxwell Charitable Fund. The State College, PA, resident never thought those rounds would be good enough for first and second place in the Wednesday night Open Jumper class, sponsored by Geraldine Nesbitt.

“I was just hoping to come here and be respectable and maybe get some ribbons,” said Kocher. “It’s a big deal for me to win here because this was one of the first really big shows that I ever attended. I have been showing here since I was a kid, but I never won. This is really exciting!” 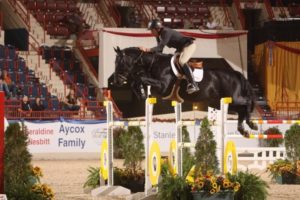 Aaron Vale set the mark for the field of 17, going clear on Finou 4 in a time of 62.409 seconds. Kocher went next on his first mount Ciana, owned by Eagle Valley Partners, LLC, and beat Vale’s time going clear in 58.818 seconds.

“Ciana just started jumping in the bigger grand prix classes this year,” said Kocher. “She felt sharp, sharp tonight. She is still a little green and I didn’t know how she would react to the lights and everything so I pulled the reins once or twice, but she nearly won the class anyway. She was amazing.” 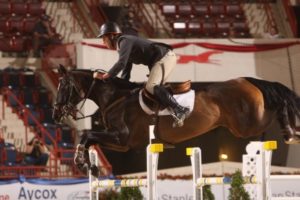 Olympic veteran Beezie Madden riding Coach and Christine McCrea on Wannick WH both rode clear but not fast enough to catch the top two. Irish Olympic veteran Kevin Babington came close to dethroning Kocher with Super Chilled going clear in 61.643, which was good enough for third place. Kocher could only beat himself with his second mount Zantos II, owned by MKO Equestrian, LLC, on the Bernardo Cabral-designed course and did, by going clear in 57.534 seconds.

“This is the horse I plan on riding in the big class on Saturday, the $100,000 Prix de Penn National,” said Kocher. “My plan was to go in there and have a nice round and not get into any trouble, but this horse has only really has one gear – fast. This was slow for him. He could have gone five seconds faster, but his going slow is faster than most horses. Hopefully, I’ll get lucky again on Saturday!” 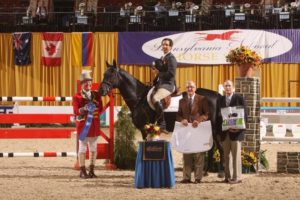 Andrew Kocher and Zantos II in $10,000 Dash For The Cash, Sponsored by Geraldine Nesbitt