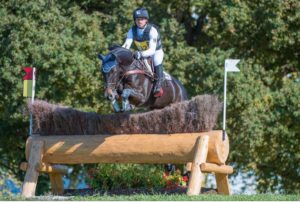 Michael Jung (GER) rode two brilliant rounds of Cross Country at Les 4 Etoiles de Pau (FRA), the first leg of the FEI Classics™ 2016/17, to hold the lead on FischerRocana FST and be within a fence of victory on his Dressage leader, the youngster FischerTakinou, now in fifth place with a few time penalties.

France’s Maxime Livio thrilled the large crowd enjoying the warm autumn sunshine by finishing bang on the optimum time of 11 minutes to rise to second place on his Luhmühlen runner-up Qalao des Mers.

Time proved influential on Pierre Michelet’s (FRA) clever Cross Country course and only one other rider finished on a clean sheet. That was the trailblazer Christopher Burton (AUS), who has now risen 22 places to 22nd on TS Jamaimo.

Jung, the 2015/16 FEI Classics™ champion, finished just one second over time on the 11-year-old mare FischerRocana FST, twice a winner of Kentucky and the individual world silver medalist in 2014.

He gave the nine-year-old FischerTakinou, a far less experienced horse, a beautifully sympathetic, unhurried ride for 8.8 time penalties but he is still within a Jumping fence of his leading ride.

“Rocana was wonderful – she is so simple to ride – and Takinou gave me a good feeling for his first time at this level,” commented Jung.

Nicola Wilson (GBR) on One Two Many and Jock Paget (NZL) on Clifton Signature both rode stylish, well-judged rounds are now in third and fourth places respectively and could put pressure on Jung in tomorrow’s final Jumping phase.

The Dressage runner-up Alexander Bragg had a great round on the big Dutch warmblood Zagreb, following Jung’s lead in taking a neat line out of the final water complex, and he is in ninth place, 0.2 penalties ahead of Australian Olympian Sonja Johnson, a sheep farmer from Perth, who has climbed into the top 10 on the tiny chestnut Thoroughbred Parkiarrup Illicit Liais.

There were two high-profile departures from the leaderboard. Laura Collett (GBR), eighth after Dressage on Palmero 4, had the bad luck to fall two fences from home at the colourful Artists’ Palette upright fence and Tim Price (NZL), 11th on Xavier Faer, was unshipped when getting an awkward jump in over the log at the last water complex (fence 22a).

Kirsty Johnston, ninth after Dressage on Opposition Detective, had an early run-out at fence 4 when the horse took a strong hold over the preceding drop and ran past the corner.

The tight time meant there were big gains to be made on the scoreboard. Among those to leap up the order were Camilla Speirs (IRL) on the diminutive Portersize Just A Jiff and Nicola Wilson (GBR) on Annie Clover, up from joint 32nd after Dressage to 11th and 12th respectively.

Pierre Michelet had makes full use of the compact site at Pau, which takes in the racecourse, and had produced what riders considered a more technical track than last year. It rode well, and there were 35 clear rounds and 39 finishers from the 48 Cross Country starters.

An exciting day is in store tomorrow with no margin for error at the top of the scoreboard and Olympic champion Michael Jung (GER) bidding to fill one of very few gaps in his CV.

There’s live action on FEI TV (www.feitv.org) from 1430 (local time) and with live scoring on www.worldsporttiming.com.