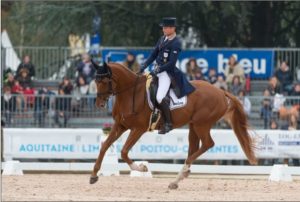 Newly crowned Olympic champion Michael Jung has given himself a great chance of winning one of very few major competitions to elude him this far, the French premier event of Les 4 Etoiles de Pau (FRA), opening leg of the new FEI Classics™ season for 2015/16.

The Ground Jury, Wayne Quarles (USA), Christina Klingspor (SWE) and Alain James (FRA) awarded the only sub-40 mark, 39.3, for his performance on FischerTakinou. The nine-year-old, by Jaguar Mail, is competing in his first CCI4*, but he showed his brilliance when easily taking the European title in difficult rainy conditions at Blair Castle (GBR) last year, and the weather at Pau has been wet.

Jung explained that the chestnut gelding missed the Olympics due to a tick infection. “He is a very talented horse and always good in the dressage – he concentrates just as well whether he is at home or at a competition,” commented the world number one.

Jung is also in fourth place on the genuine mare FischerRocana FST, a dual Kentucky winner, and will take some beating as he aims to get a head start on the new FEI Classics™ leaderboard again.

German riders have headed the sought-after FEI Classics™ rankings for the last two years; Ingrid Klimke’s Pau victory in 2014 contributed to her success in 2015 before Jung took over in 2016 in the lucrative series that links the world’s six CCI4*s.

British rider Alexander Bragg, who works part time as a farrier, has produced the test of a lifetime to lie second amid distinguished company; he scored the excellent mark of 43.0 penalties on the 12-year-old Dutch-bred Zagreb, a horse he has produced from one-star level.

The pair made their CCI4* debut at Burghley but were eliminated on the Cross Country. “My main aim was an accurate test, so I am pretty happy right now!” said Bragg, 35. “Zagreb is improving on the flat all the time and is more composed in his flying changes.”

Fellow Brit Nicola Wilson, a regular visitor to the popular French event with its racecourse setting, friendly atmosphere and beautiful Pyrenean backdrop, is third on One Two Many on 43.6.

The veteran Belgian rider Karin Donckers is fifth on Fletcha van’t Verahof, only 0.1 penalty ahead of New Zealander Jock Paget, sixth on Clifton Signature. Maxime Livio (FRA), is the highest placed of the home riders in seventh on Qalao des Mers.

Tim Price (NZL), the runner-up in 2015, is in 11th place on CCI4* first timer Xavier Faer, last year’s winner, Astier Nicolas (FRA), is poised in 12th place on Molokai and experienced Cross Country rider Kristina Gifford is not far off the pace on Billy The Red and Calvino ll, currently holding 13th and 14th places.

Christopher Burton (AUS) starts the Cross Country action tomorrow when he is first out on course at 1300 hours (local time); the recent Burghley winner will be hoping for one of master designer Pierre Michelet’s influential tracks as he scored the disappointing mark of 60.3 on the 17-year-old Australian Thoroughbred TS Jamaimo and is lying well down the order in 44th place out of the 49 starters.

Lower-placed Dressage competitors shouldn’t be disheartened; riders are viewing the Olympic designer’s Pau track as a challenging test, full of twists, turns and changes of camber, plus the reappearance of the carved fish that proved so influential at the 2014 World Equestrian Games at Haras du Pin.

A thrilling day’s sport is assured, and there is live coverage on FEI TV (cross country and jumping) at www.feitv.org and live results on www.worldsporttiming.com