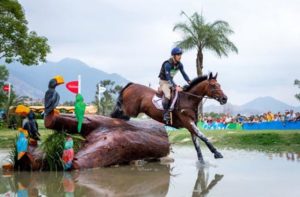 Les 4 Etoiles de Pau (FRA), first leg of the FEI Classics™, is the only CCI4* in the northern hemisphere to have eluded double Olympic champion Michael Jung, who has had the most extraordinary run of success over his career to date.

The clear winner of the overall FEI Classics™ title for 2015/16 with victories at Kentucky (USA) and Badminton (GBR), Jung was second last year at Pau on fischerRocana FST. He returns again this weekend with the lovely 11-year-old mare, with proven 4* form with two victories at Kentucky. He also brings his double European gold medal ride fischerTakinou and will be looking to get a head start on the FEI Classics™ 2016/17 leaderboard.

Jung is the sole German at Les 4 Etoiles de Pau this weekend in an international field in which 13 nations are represented. Competition starts tomorrow 13 October with the horse inspection at 09.00 CET, with the Dressage phase starting at 09.00 CET on Friday 14 October.

Britain and New Zealand have traditionally enjoyed success at Pau and the two squads this year are headed by riders who had to sit on the sidelines at the Rio Olympic Games.

Tina Cook (GBR), travelling reserve for the British team in Rio and double bronze medalist at the 2008 Olympics, brings Billy the Red and Calvino. Jock Paget (NZL) had to withdraw Clifton Lush in Rio with an injury, was runner-up at Pau in 2012 and rides the exciting prospect Clifton Signature this weekend.

Fellow New Zealander Tim Price, second to Jung in the 2015/16 FEI Classics™ standings and third at Pau 2015, brings the 10-year-old British-bred Xavier Faer to Pau for the horse’s first 4* outing.

The starting line-up also features a strong contingent from Ireland, plus riders from Italy, Belgium, Portugal, South Africa, Spain and the USA.

The FEI Classics™ 2016/2017 season looks set to get off to a thrilling start at the premier French event where everyone is waiting to see what Olympic course designer Pierre Michelet has in store.

Live coverage on FEI TV (cross country and jumping) at www.feitv.org and live results on www.event-pau.fr.