October 2, 2016 (Devon, PA) Nothing dampens the spirit at Dressage at Devon and on Saturday, excitement was in then air, with high level performances throughout the day, the Tempel Lipizzans, and the Grand Prix Classes in front of an very enthusiastic crowd. 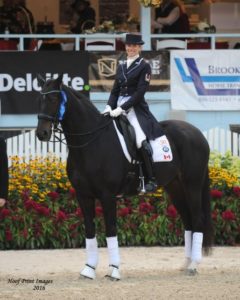 Following up on their win in the Prix St. Georges CDI yesterday, Tina Irwin and her equine partner Laurencio claimed the blue ribbon in the FEI Intermediaire I with a score of 73.579.  Laurencio is a nine-year-old Oldenburg that Tina and her husband, Jaimey, found in Germany when looking for a horse for Tina. He was not developed and did not stand out, but when Jaimey rode him — and stayed on awhile — Tina knew there must be something he liked. It took just three steps for Tina to discover what it was — the incredible elasticity and suppleness of his movements. Has earned the nickname Teddy for his loving nature and lowers his head for a hug from Irwin’s two young children.

Tina decided to wrap up the season with a visit to Dressage at Devon because of its prestige and to see how Laurencio would perform in the “electric” atmosphere of a stadium packed with an enthusiastic crowd. Clearly, he passed the test. “He’s a showman,” says Tina. “As soon as we entered the ring, he perked up.”

Both the FEI Grand Prix Special and the Grand Prix Freestyle were held under the lights on Saturday evening. The GP Special was won by Jill Irving on Degas 12 (De Niro x Rosana M).

The freestyle, as always, featured not only tremendous performances but demonstration of amazing partnerships. The synchronicity between the music, the horse and the rider is “not easy to do. You’re basically controlling every foot fall,” said the Dressage With the Experts commentator. This class was won by Judy Reynolds on Vancouver K, 14 year old KWPN gelding with a score of 77.450.

To prepare the ring between the GP Special and the GP Freestyle, the “princess” crew went into full gear, working hard and providing humor and laughter to the audience.

One of the highlights of Dressage at Devon (and yes, other horse shows too) is the opportunity to talk to the winners about their experience. Jill was thrilled with her time at Devon, which she described as an “iconic, historic” horse show. While she has shown at Devon before, she said, “Now I’m here and I’m winning, so it’s really my dream.” She attributed her success to having more time to focus on riding and get to know Degas better now that she’s launched her children. Judy said the proximity of the warm up to the ring helped to acclimatize Vancouver K, who she described as her “best buddy,” to the crowds and lights of Devon. A new fly bonnet that muffled the sounds helped too. These were the final touches to the pair’s hard work that helped them pull off a ride that delighted the audience.

What’s next on the schedule? For most, a well-deserved break and then on to the winter season.

Complete results can be found at www.dressageatdevon.org.