Devon, PA – The breed division of Dressage at Devon continued on Wednesday with suitability, under saddle, Materiale classes and much more.

Much like the Olympics, there are always great, behind-the-scenes stories at Dressage at Devon (DAD). For example, there is the three generation Reggio/Belles family – breeders, trainers, riders and handlers from Windy Ridge Farm in Bethel, PA who have been competing at DAD since 1989. And, while multiple generations of riders at DAD are not all that unusual, this family is quite special.

Judy Reggio (Suzanne’s mom and Tori’s grandmother) had what she calls a “chronic disease,” centered around her love of horses. She wanted to be Roy Rogers and Dale Evans. When she was young, she and a few friends made the money to buy and care for a $100 horse. She went on to start Windy Ridge farm and coached polocrosse. Suzanne Reggio-Belles, Judy’s daughter and Tori’s mom, started out as a rider, spent time in pony club and has trained a baby to I1. Today, she showed her 4-year old in the GA/USDFBC 4/5 Year Old Materiale Championship. 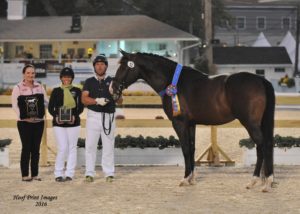 Then there’s Tori who got her start at DAD in a leadline class at the age of six. She has had many successes on her horses in Dressage Seat Equitation and today, came in third in the Youth Handler class as well as earning the high score for a Dutch warmblood awarded by KWPN NA. The future is bright for Tori who rides Charlotte, a German Sport Pony, owned by Ilona English of Summit Sporthorses and will be getting an FEI pony next week from the Dressage4Kids program started and run by Lendon Gray.

Born in the USA

The “Born in the USA” Breeders Awards was started at Dressage at Devon in 2003 and since that time other shows have followed suit. The class features foals born in the US, and these horses prove that the US can successfully compete with international breeders. Prize money is divided among fourteen categories including Mares, Stallions, Fillies and Colts of 2016, Yearling Fillies and Colts, Two year old Fillies and Colts and others. This year’s class high score was earned by Royal Celeste FH (Royal Classic x Diorienne), bred by Eliza Rutherford and owned by Quinnten Alston of Colera MD with a score of 83.4000.

This year is the first year for the BA/USDFBC 4/5 Year Old Materiale Championship classes in which mares, stallions and geldings compete together. “I think it’s fabulous,” says Judge Christal Carlson. “We are trying to produce riding horses and this gives us the opportunity to see them together. Now we can pick the best horse!” The class was won by Harvest, owned by Alice Tarjan of Oldwick, NJ.

The high scorer of the day was Harvest, a 4 year old black stallion with a fabulous score of 88.604.

The Breeder’s Group was won by Broadfields 121 (North Andover, MA) and Cara Kettenbach with a score of 80.750.

All results are available at www.dressageatdevon.org.

Thursday will feature the Individual Breed Classes with more than 20 breeds from the Akhal-Teke, Hanovarians, Friesians, Drum Horses, the Georgian Grande Horse and Lipizzans. Plus shopping, great food and more.

General admission tickets are available at the door. For reserved seats or additional information, visit www.dressageatdevon.org.

About Dressage at Devon
Dressage at Devon www.dressageatdevon.org has been a premier North American Equestrian event since its founding in 1975. It combines world-class dressage competition and the world¹s largest open breed show with the international Fall Festival show and special activities for the entire family. The six-day event attracts hundreds of riders from around the world and thousands of spectators. Dressage at Devon is a 501(c) (3) PA non-profit organization, benefitting equine education.