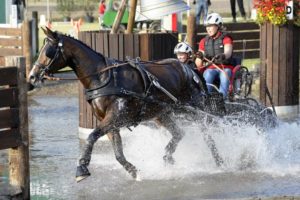 Anika Geiger (GER) was the runner-up in the marathon of the Young Drivers Single Horse class and won gold thanks to her dressage victory and good cones round (Photo: FEI/dr. Jürgen Schwarzl)

From 22nd to 25th September, Schildau in Germany hosted the very successful fourth edition of the FEI European Championship for Children, Juniors & Young Drivers. A total number of 82 children and young drivers from 12 nations were represented. Nine nations battled it out in the Nations Cup. After four days of sport at this high quality event, six new European Champions were crowned at this season’s highlight for the young driving talents.

The sun came out every day, which resulted in very nice temperatures, perfect conditions for great driving days. The whole venue was very welcoming, colourfully and beautifully decorated. The ‘Arena of the Schildbürger’ was very nicely done up and the atmosphere was wonderful. The Pferdesportarena Schildau is a unique driving venue where the obstacles all had a theme, inspired by the citizens of Schildau, the Schildbürger. The obstacles were situated close together, which allowed a perfect view for the spectators from the fixed stands. Many, many visitors had found the way to the Arena in Schildau on Saturday. The organizers had a slight stomachache because traditionally the marathon day in Schildau is on Sunday. But the doubts vanished quickly during the morning at the sight of the full parking places.

A new dressage arena had been created this year. The previous arena was used as the warm up arena, which resulted in ideal conditions for all. The young drivers showed without exception nice dressage tests. The correctness of the turnouts and the accurateness of the figures were impressive. The quality of the horses in the single horse class was amazing. Nearly all turnouts sparkled through their quality of paces but also by the correctness of their education, which pleased the spectators.

International Course Designer Josef Middendorf (GER), who replaced his compatriot Dr. Hartmut Kaufmann after he had unfortunately fallen ill, had designed a tough and EC-worthy marathon. The youngsters all performed at a very high level, proving there is a nice new driving generation coming through, both in technique and style, one saw mostly great rounds. At the top of especially the Juniors and Young Drivers there was no difference between the ‘normal’ senior Championships.

Children Single Ponies
Twenty-four Children aged between 12 and 14 years old competed against each other in the Single Pony class. The 14-year-old French talent Chloe Ubeda could not have wished for a better birthday present. After her 8th place in dressage, she moved up to the second place in the standings after winning the marathon. She and Italy’s Andrea Pilli were the only ones to master the difficult cones course without any faults, which put the pressure on the leader of the standings, Sweden’s Andreas Sjöberg. The 13-year old dropped to the 6th place after knocking one ball down, in addition to time penalties. Ubeda competed with her 17-year-old pony Kobus, with whom her sister Valentine Lenormand won the individual gold medal at the 2014 European Championships in the Juniors Pony Pair class.  The 13-year-old Elise Strauss won individual silver with her 7-year-old Welsh pony Sir James. Elise’s parents are very involved in the driving sport in Sweden; her mother Karin is the Driving Director at the upcoming FEI European Championships in Göteborg 2017. The bronze medal went to Great Britain’s National Champion Colette Holdsworth, driving her 8-year-old mixed Welsh Warm blood pony Pepper, which she only started to drive in November 2015.

Junior Single Ponies
15-year-old Andrea Schöftner was introduced to the driving sport through her parents; her father Josef and her mother Astrid Schöftner were international single and four-in-hand drivers. She started driving at the age of 9 years, achieving many good results since then. She drove her German riding pony Dr. Watson to the 8th place in dressage and moved up to silver thanks to an excellent performance in the marathon, in which she finished on the second place, behind Markus Clasen (SWE). Denmark’s Mikkel Kruse Johansen was on gold before the cones, but two unfortunate knockdowns dropped him to silver, which allowed Andrea to take home the gold. Another bronze success for Great Britain with Emily Viller and her 20-year old pony Ryan whom she has been driving since 2012.

Marlena Brenner (GER) laid the basis for her gold medal in the dressage, which she and her 19-year-old riding pony Leonardo won. Three out of the five international jury members, who worked excellent as a team during the whole event, put her in first position. With her third place in the marathon, which was won by Berengere Cressent from France, Marlena kept her leading position and was able to hold on to this in the difficult cones course. The 21-year old Brenner was thrilled with her gold medal: “I have been active in the driving sport since 2008, first at small events and then it all went quite fast. My pony Leonardo has accompanied me ever since the start of my driving career and we have developed together. Schildau was a great event for us, youngsters. I do not say that just because I won gold, it was a perfect event, simply ideal for us.”
David Palkovics (HUN) celebrated his 19th birthday in Schildau and took home the silver medal with his 11-year-old Caramelo, with whom he also successfully competed at the EC 2014.
Linnea Kristiansen from Sweden dropped from silver to bronze in the cones, driving her experienced Plassens Lucky Luke.

The final chord made by the Young Drivers in the Single Horse class was fascinating and exciting. It was obvious that the medals would go to Germany, but who would receive which colour was still open. And Marie Schiltz from Luxemburg stayed very close to her German opponents, so anything could have happened. Marathon winner Marcella Meinecke was not very lucky in the cones, which resulted in several knock downs and she lost her chances to a medal. Jovanca Marie Kessler drove superior, with only one ball, claiming the bronze medal. Then Marie Tischer entered the arena. Totally not excited and obviously without nerves, she and her Dreamgirl were the only ones who managed to complete the course without any mistakes. Dressage winner Anika Geiger was last to go. A ball fell in the middle of the course, reducing her advantage to less than 3 penalty points. She could not afford another knock down and no more balls fell, so it was gold for the 20-year-old daughter of German national trainer Karl Heinz Geiger.

“I am driving since I am 10 years old,” tells Anika. “The sport fascinates me because of its versatility with the three disciplines. It’s been a year and a half with my horse Anabelle. It is great fun to drive her. Schildau was simply a great event. I would really like to thank all organisers and people responsible in our team.”

The Nations Cup was won by Germany after a close battle with France and Sweden, who took home silver and bronze.