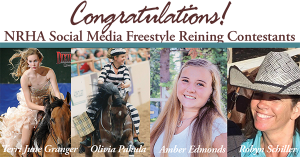 During the month of August, the public had their chance to vote on the four NRHA members who would compete in the November Freestyle. 18 NRHA members submitted their best freestyle reining videos to be uploaded to our social media page in hopes that their scores would take them to compete for the “slide of their life”.

Based on the number of “likes” to the contestants’ video posted by NRHA, the top four scoring contestants to advance on to the Freestyle competition are: Terri June Granger of Dothan, Ala.; Robyn Schiller from Hollister, Calif.; Amber Edmonds of Pepperell, Mass.; and Olivia Pakula from Scottsdale, Ariz.

This great opportunity allows NRHA members and their horses to compete in this unique reining competition during the 2016 NRHA Futurity and to wrap up the 50th anniversary of NRHA.  The three top scoring riders from the 2015 Congress Freestyle and from the 2016 RAM Invitational NRHA Freestyle Reining have been invited to compete. Those six riders to round out the competition will consist of Pete Kyle, Drake Johnson and Heather Johnson from the 2015 All American Quarter Horse Congress and Bub Poplin, Shane Brown and Steve Schwartzenberger from the 2016 RAM Invitational NRHA Freestyle Reining.

The freestyle competition will take place on November 30th at 6 p.m. in the Jim Norick Arena. Tickets will be available online at nrhafuturity.com