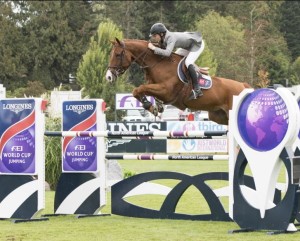 “As Tembla gets older, she gets better and better,” Cook said about his growing partnership with the 12-year-old Zangersheide mare (Tangelo van de Zuuthoeve x Cavalier). “She gets more consistent and always tries. When I ask big things of her in the jump off, she goes ahead and does it.”

Cook bested a six-horse jump off to take the show’s highlight prize and valuable World Cup™ qualifying points, with not only the fastest time of 42.95 seconds but also without recording a single fault.

“When you’re trying to qualify for the FEI World Cup™ Final and you start with a win, it obviously builds your confidence a great deal,” Cook added. “It also takes a lot of pressure off because you won’t have to work as hard, or come down to the wire as much, to qualify. It’s just such a confidence booster to do so well your first time out.”

Despite slightly rainy conditions, Sunday’s Qualifier, set by Ireland’s Alan Wade, saw one of the venue’s largest crowds gather to see the sport’s best. “Joseph Rycroft (CAN) was my partner all week [and] we really tried to make a fair track and let the athletes and horses show their skills and their abilities—and their bravery. We had good sport this afternoon and that’s all anyone can ask for,” said Wade.

A similar sentiment was shared by Cook, following Sunday’s success that validated the efforts of developing an opinionated horse. “Tembla was in San Diego, [Calif.], when we bought her in 2013,” he said. “She was a little bit difficult and wanted to do it the way she wanted to do it. Some days are better than others. Like all mares, she can be great or not wanting to play so much. It took a little bit to get it to where there’s a give and a take, but we’ve been doing grand prix classes for over a year and a half now, and she just is getting better and better.”

The first of the class’s 26 starters to enter the ring—and the first to ride clear—was the local favorite, Brian Morton (CAN), riding the 11-year-old gelding, Atlantis T (Padinus x Guidam). Following in the fault-free footsteps of Morton, ten riders later, was fellow Canadian Brenda Riddell and Dutch Amouretta (Dutch Capitol x Wellington). The third clear of the afternoon came from the Audrey Coulter (USA) and Alex (Arpeggio x Mon Cheri).

“I thought it was a well set course with a couple of really tall verticals,” said Coulter of the first-round track. Last season, the American rider qualified for the FEI World Cup™ Final through the Western European League, but this season, she’ll primarily ride in North America with the goal of earning a bid through the East Coast sub-league. “All my horses are back in States, and Harrie [Smolders] and Axel [Verlooy] will trade off training me at shows. Last year, qualifying for the Final was a big goal for me and this year, it is again.”

Notable, yet heartbreaking, performances came early in the order from some of the younger riders in the field. Jennifer Gates (USA) and Jenna Thompson (CAN) left the rails standing in the first round, but both finished with a single time fault, ending their efforts to collect meaningful points.

Although with six seemingly smooth clear rounds, Wade’s 13-obstacle track, in 84 seconds time allowed, proved a challenging task as many of the favorites fell victim to three difficult fences, in particular. When asked his thoughts on the low number of clears in the first round, Wade said, “I don’t ever play a numbers game. I felt that there were problems all along the track; people coped and some didn’t.”

One of the course’s mandated 1.60m fences, the Noel Asmar vertical at fence no. 8, kept frontrunners Andrew Ramsay (USA) and Nayel Nassar (EGY) from jump-off contention. A late, balancing check from a sweeping, rollback turn to jump no. 11 caused another upset for veteran rider Eric Navet (FRA). But it was the penultimate obstacle, a double combination, that claimed the most faults from riders like Rich Fellers (USA) and Patricio Pasquel (MEX).

The three additional riders that advanced to the jump off rode in the final third of the starting order: Nikolaj Hein Ruus (DEN), Karl Cook (USA), and Jack Towell (USA).

Cook consulted his longtime trainer, Eric Navet, to build a strategy for the class that emphasized the fences to ride carefully and the correct rhythm to hold. “Eric, after the first round, said to watch out for the pink, Asmar vertical at fence 8, rolling back away from the gate,” Cook said. “He said to not try to save time going to that vertical. Also, [he gave] the same advice to fence 11, the vertical right before the double combination, which he had down.

“Ride a course where you don’t have to interfere. Get your canter before the first fence and continue it along, is what Eric always says. Instead of fighting, the goal is to just flow.”

Brian Morton was first to ride for the jump off, posting the time to beat of 45.77 seconds. “The strategy for me there was really just to focus on what was right for me and [my] horse. Make sure I didn’t have a fence down and go fast enough to put a little pressure on everybody else,” he said.

The next two riders, Riddell and Coulter, both recorded faults in the final round so the thrilling conclusion came from the efforts of the remaining three riders. With an understanding and a feel for the course, all three attempted much more daring angles to an oxer that came mid-course.

Hein Ruus swiftly claimed the first-place position after crossing the timers at 44.40 seconds with zero faults, aboard Big Red, a horse that more recently partnered with Richard Spooner (USA) in a bid to qualify for the Rio Olympics.

“Spooner had [Big Red] for four months then my boss took him back to show in the high amateurs at Spruce,” Hein Ruus said. “After Spruce, he said, ‘Nik, I’d like you to ride the horse again.’ The horse has got more experience now because last year, when I took him to his first grand prix, ever, he was [only] at the 1.35-1.40m level. Now he can handle his power a little better. He’s amazing. I’ve been a professional for 24 years, and I haven’t dealt with a horse like this with a mind like this. He knows how to handle himself; he’s so confident so I have to be on the spot myself.”

But immediately after Hein Ruus upset Morton, Cook clocked the fastest round of the day at 42.95 seconds. Then, last to ride, Towell nearly caught Cook’s time but an unlucky rail meant that he would have to settle for fourth.

“Where [Eric and I] thought we could make up some time was where Nikolaj added to the oxer at the fourth fence,” said Cook. “We thought if I did one less stride to the second fence then I’d set up a big canter that continued throughout the course—to lope along and keep going.”

“In the jump off, I started out at a good pace from the first fence to the second,” said Hein Ruus. “I planned to do ten strides with a good turn to [the third fence], the Asmar vertical. That’s where I lost [the class]. I could have been on a time of Karl if I left out a stride to the oxer then left out a stride to the wall. But I’m still happy. ‘That’s where,’ I told Karl, ‘you could get me there.’”

Pleased with his win, Cook expressed his hopes to qualify for the Longines FEI World Cup™ Jumping Final, which will to take place in Omaha, Nebraska in March 2017: “I’ll be doing the FEI World Cup™ events on the West Coast. I’ll do Sacramento, Del Mar, and Las Vegas. I hope to do Mexico again. We had a great time in Mexico when we went [last season]. And I’ll do Thermal, as well. Hopefully, I’ll qualify for Omaha.”

“I think the main thing that Longines has brought to the sport in North America as a sponsor is unity,” Cook added. “Shows here have always been based on the show management, but there was no unity from show to show. Now, there’s strong leadership from Longines, which creates unity for the athletes and for the spectators. Without unity, the sport will never grow. The brand makes it more of an event and it makes the sport more accessible to spectators.”

The West Coast sub-league season opener also saw a strong presence of Mexican riders, presumably with a shared focus of qualifying for the Final.

“Mexican sport is on the way up and the riders are very good,” said Hein Ruus, who has worked for the Pasquel family in Mexico for the past four years. “They’re a lot more competitive and ready for big sport because they’re trying to bring big sport to Mexico.”