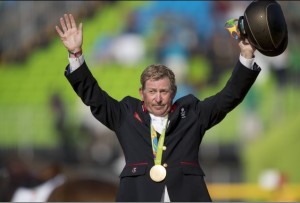 He broke his neck in a fall 16 years ago, he has a replacement hip, he’s 58 years old, competing at his seventh Olympic Games and he was riding a horse that has been struggling with injury for over two years, but Nick Skelton made Olympic history when becoming the first ever British rider to win individual Jumping gold at Deodoro Olympic Park in Rio de Janeiro today.

In a thrilling finale to an extraordinary two weeks of equestrian sport, the man who helped claim his country’s first Olympic team Jumping medals – and golden ones at that – for 60 years in London (GBR) four years ago, simply galloped the rest into the ground when pace-setter in a third-round jump-off against the clock with Big Star.

Sweden’s Peder Fredricson and the brilliant All In claimed silver when producing the only other fault-free performance in the closing stages, while Canada’s Eric Lamaze took the bronze when posting the fastest time but leaving a fence on the floor with Fine Lady.

Skelton is not a man known for displays of emotion, but he couldn’t hold back the tears when he climbed onto the podium to receive the ultimate sporting accolade. And the response of his fellow-riders showed just how respected he is, 2008 Olympic champion Lamaze grinning as though he was taking the gold himself as he congratulated the British rider with an enormous hug.

“I’ve been in this sport a long, long time and to win this at my age makes me so happy, I always wanted to do it and nearly did it in London”, Skelton said, referring to his fifth-place finish in 2012.

He wasn’t the only tearful athlete this afternoon, world and European double-champion Jeroen Dubbeldam from The Netherlands was distraught after picking up a time fault in the second round when clearing the line 0.02 seconds over the time with Zenith.

Reflecting the extraordinary quality of the horse-and-rider combinations at these Games, a total of 13 went clear over the Brazilian course designer Guilherme Jorge’s first-round track and six managed to keep a clean sheet second time out.

And the passionate fans roared their approval from the stands, joined by plenty of VIPs who flocked to see equestrian sport at its very best, including the Dutch royal family, the King and Queen of Sweden, members of the Qatari royal household, former IOC President Jacques Rogge, IOC members Gerardo Werthein and Denis Oswald, and IOC Director General Christophe de Kepper.

First to go in jump-off for the medals, the equestrian equivalent of a penalty shoot-out, Skelton decided “to go as fast as I could but be safe and not take risks, he’s a quick horse anyway. I wanted to put pressure on everyone else and I had luck on my side”, he explained afterwards. As it happened his target time of 42.82 seconds would prove unbeatable.

This final course began with a wall topped by a pole, and Steve Guerdat’s dream of a back-to-back Olympic double with his gelding Nino des Buissonnets was shattered when this toppled. He raced on to break the beam in 43.08 seconds, and when Qatar’s Sheikh Ali Al Thani (First Devision) and America’s Kent Farrington (Voyeur) both faulted twice it seemed a medal might still be within the Swiss star’s grasp. But then Sweden’s Peder Fredricson steered All In home and clear in 43.35 seconds to up the stakes and definitely slot into a medal position with just one left to go.

Canada’s Eric Lamaze is one of the most feared opponents in the sport, and with his mare Fine Lady in spectacular form from the outset last Sunday, he was leading the individual standings until all 35 qualified riders reverted to zero status on this final morning. Setting off at a blistering pace he was clearly in the lead coming to the second-last, but a tiny slip as he made a tight turn to angle this vertical left his mare off-balance and she clipped the top rail to gallop on home in 42.09 seconds with four faults on her scoresheet.

“My biggest nerves of the Games was waiting for the others to go in the jump-off”, Skelton admitted. “I didn’t look too hard, I walked around and took an odd look but I had to watch Eric and he made me sweat for a minute!”

He can hardly believe that the horse that carried him to that glorious team victory on home turf four years ago has managed to overcome adversity and injury to do it all again for the individual title.

“Today was amazing”, Skelton said. “Big Star has been a bit rusty. The last time he won was in Aachen (GER) in 2013 and it’s taken two years to get him back on track again. A lot of people put a lot of time into bringing him back. He’s always been amazing, he wants to do it all and he has all the right attributes – he’s the best horse I’ve ever had and the best I’m ever likely to have. I’m so pleased for him. On his way back we nursed him and nursed him and today he came good for me.”

Skelton is a pretty tough cookie himself. The courage and tenacity he showed in his own recovery after breaking his neck in a fall in 2000, retiring in 2001 and then changing his mind the following year, and the pain he battles with on an ongoing basis might be enough to put a stop to most competitive careers. He needed a set of steps to climb back into the saddle after the medal ceremony. “I’ve got chronic back pain so getting legged up is painful and I have a metal hip on my left side so I only get on like this.” But the tearful smile said it all.

Lamaze put it into perspective. “The Olympics is the most difficult challenge in our sport, we try our hardest to do our best. Anybody in that jump-off deserved a medal. Most of us go to shows every week and you can win a big Grand Prix, but an Olympic medal – well that stays with you forever!”