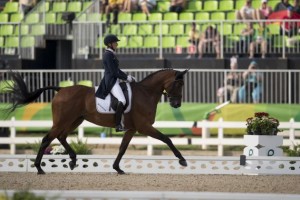 A brilliant ride by Ingrid Klimke maintained Team Germany’s lead as Eventing dressage drew to a close today at Deodoro Olympic Park in Rio de Janeiro (BRA). But her score of 39.50 with Bob gives the defending Olympic champions only a fractional advantage of 0.2 penalties over the feisty French side going into tomorrow’s much-anticipated cross-country phase.

In a typical Olympic contest during which some competitors exceeded expectations while others couldn’t find the performances they were looking for today, it was the mark of 39.20 earned by Mathieu Lemoine and the elegant Bart L that put the French right into the frame. So, fourth-last to go, Klimke could feel the pressure, but the 48-year-old daughter of dressage legend Reiner Klimke, who scooped eight Olympic medals during his spectacular career, kept a cool head.

It wasn’t all plain sailing however.

“Bob was quite excited outside in the warm-up and he was bucking, but when he came into the arena he just went “OK, here I am, I’m ready – if you want let’s go for it!” she said afterwards.

There’s very little between the leading group of countries going into tomorrow’s cross-country phase, with the Australians lying third, just over four penalty points behind the French, and the British just one more point further adrift in fourth. The Irish moved up a place to fifth thanks to a great performance from Jonty Evans and Cooley’s Rorkes Drift, while New Zealand and USA share sixth.

First-day leader, Great Britain’s William Fox-Pitt, remains at the head of the individual standings with Australia’s Christopher Burton hot on his heels, and Lemoine has slotted into third and Klimke into fourth, while defending double-Olympic champion, Michael Jung, is next in line in fifth place. With less than five points separating the top 10 riders however, and few, if any, expected to avoid time penalties while negotiating the tough track set by French course designer, Pierre Michelet, the stage is set for a tremendous day of cross-country action tomorrow.

“I haven’t seen such a challenging course since Sydney (2000 Olympic Games). My Bobby is fast and he is a mature horse so he should cope well and I’m looking forward to it. But we know that when we go out there we have to do a very precise job tomorrow,” Klimke said this evening.

There were surprises of various kinds as the day-two session played out, with some dreams beginning to unravel while others were just starting to take shape. The latter was the case for Jonty Evans who produced a personal-best score at championship level when posting 41.80 with Cooley’s Rorkes Drift. This has left him lying ninth individually and has anchored his country’s chances going into their more-favoured cross-country phase. The judges clearly appreciated the quality of the canterwork of his 10-year-old gelding, one of 11 Irish-bred horses in the field of 65 starters. Evans said, “I’m thrilled to bits with him, he couldn’t have done any more today – he couldn’t have tried any harder.”

China’s Alex Hua Tian enjoyed some moments of brilliance in his test, but had to settle for 42.40 and 12th place at the end of the day with Don Geniro. “I made two big mistakes, the judges really wanted to give me good mark – but I nailed all the changes I think” he said. “The first entry was great, he has a massive extended trot but he took an unbalanced step and broke into canter. It’s very frustrating because it’s the extended that gives him his big scores!” he pointed out.

Belgium’s Karen Donckers slotted herself into seventh individually when posting 41.10 with Fletcha van’t Verahof, but it was two competitive results from Lemoine and Thibaut Valette (Qing du Briot) who put 41.00 on the board, that kept the French team right in the frame. Meanwhile Australia’s Shane Rose really did the business with CP Qualified whose 42.50 ensured the 56.80 posted by Stuart Tinney and Pluto Mio could be discounted.

Many of the horses were tense coming into the arena today, but Rose reassured his 13-year-old Holsteiner gelding with a big pat on the neck before going to work into the arena, and was rewarded with a very pleasant performance. Last-line British rider, Kitty King, found herself struggling from the start however with the Dutch-bred Ceylor LAN. And another for whom things didn’t go quite the right way was New Zealand’s Jonelle Price whose nine-year-old, Faerie Dianimo, broke into a canter during their early trot-work, eventually posting 49.50. “I was very disappointed” she said, “he was really hot in the warm-up but I was hoping for better in the arena. It was too bad it happened at the Olympic Games, but I’m hoping for a much better day tomorrow.”

Klimke’s vital anchor ride for Germany might also have been blighted by over-enthusiasm, but she managed to get all the fizz under control at just the right moment and pulled off that all-important score that has kept Germany out in front in the race for the team medals. “I was so pleased in the end, he did a fabulous test” she said of the 12-year-old Bob.

Every one of the riders agree however that dressage will not be the all-influencing factor in Eventing at the Rio 2016 Olympic Games. Pierre Michelet has thought long and hard about how to challenge the most experienced riders in the sport along with those who have relatively less mileage on the clock.

“I want the best to win without asking too big questions of the less experienced riders. The reputation of the sport is important. I want to challenge the riders and I ask them to find clever solutions for the many options on offer. To get on the podium they will need to be brave, accurate and bold” he said. There has indeed been a lot of course-walking going on over the last few days as riders make their plans and then alter them and settle on new ones that will get them home on the quickest and safest route.

“This course is not about one signature fence, it’s about about clearing all of them! I ask the difficult questions from the start, that is my signature. The first water will be fence no. 4 already. The riders need to be ready from step one.”

Talking about creating the lovely track that wends it way up and downhill through the land that surround the Deodoro military complex he explained, “we started three years ago, first with an architectural firm to map out the track and the walkways and then the track builders started to work with improving the ground. Then we decided the spots for the fences. I came to Brazil in December for a month and the final details took two weeks. The layout was the same for the test event in 2015, but all the fences are new because of the different level of difficulty” he pointed out.

Cross-country day looks set to be a thriller, and it seems it’s going to be a wide-open race for the medals right down to the final day. There is almost nothing between the Germans and French at the head of affairs, and with the British so close to the Australians who are currently in bronze medal spot and Ireland, New Zealand and USA a real threat to any of those ahead of them who might lose their grip there’s no room for error over a course that, the night before they take it on, may well be giving many of the world’s top event riders a restless night’s sleep.

Pippa Funnell (GBR): “I was really, really pleased with his [Billy The Biz] performance, I was thrilled with him. There were a few little bits here and there, but if I’m honest I think I’m being greedy, if I think of where he came from three years ago I’m thrilled.”

Kitty King (GBR): “It was slightly disappointing because he’s capable of a lot better; he did some good work but he just made a couple of uncharacteristic mistakes. One of his highlights is usually his medium trot, but it’s a massive atmosphere for the horse and he’s only nine. Today wasn’t quite what we’d hoped for but hopefully we’ll pull some back tomorrow.”

Pierre Michelet course designer (FRA): When asked about the Ground Jury’s opinion of his cross-country track – “they said it is fantastic, but they are always polite!”

Nick Turner, Irish Chef d’Equipe, talking about the competitive position of his team after dressage: “We are doing great and now we just need to keep a lid on it. They (the Irish team) just need to keep doing what they’re doing. This result is why these four riders were selected.”