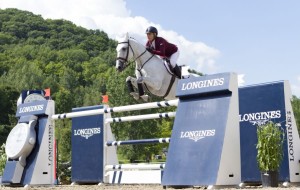 The NAL is the product of a partnership between the FEI and Longines, the luxury watchmaker, with the main objective set as elevating World Cup level show jumping in the United States, Canada, and Mexico. And due to the commitment to excellence, the series of 14 events is providing an improved qualifying experience for the sport’s horses, riders, organizers, and spectators.

With seven events on the West Coast and seven events on the East Coast, horse-and-rider pairs have the opportunity to carefully select events to best suit their competition calendars. And for those balancing commitments abroad, the League’s format counts the top four scores, out of a possible seven results, which allows for even the tightest schedules to have the flexibility to qualify for the Longines FEI World Cup™ Jumping Final.

The inaugural season’s 14 events will continue to comprise the series, now in the second year of the three-year contracts (with the exception of Valle de Bravo, Mexico moving to Guadalajara, Mexico). And identical to last year’s strong start, International Bromont will once again open the NAL at the historic Bromont Equestrian Park, host to the equestrian sport events during the 1976 Montreal Olympics.

“When we received the inaugural event last year, we realized how important the need is for our sport to have such a cohesive league, with shared goals, which brings excitement to the sport all over North America,” said Roger Deslauriers, the manager of the Bromont Equestrian Park. “Hosting this event pushes the team to thrive for excellence in all aspects of the show.”

“Celebrating the 40th anniversary of the 1976 Olympic Games, we cannot be happier to once again receive all of these international riders and to be the start of the NAL season,” Deslauriers added. “By bringing quality, international events such as the Longines FEI World Cup™ North American League to Bromont, we wish to inspire and promote the next generation of athletes.”

Riders to watch at the event include 2008 Olympic silver medalist Mac Cone (CAN), top Irish talent Richie Moloney (IRE), and Team USA riders Leslie Burr-Howard (USA), Christine McCrea (USA), Jonathan McCrea (USA), Todd Minikus (USA), and Callan Solem (USA). But what makes the sport exciting and captivating is that it can be any of the talented entries to leave the rails standing and the time short to walk away the day’s victor.

Sunday’s spectators can be sure to expect great show jumping. Brazil’s Guilherme Jorge will design the course as his final engagement before he leaves to his home country as the official course designer for the 2016 Rio Summer Olympic Games.

The West Coast sub league will also begin in Canada, at Thunderbird Show Park in Langley, British Columbia, on August 28 at 14:00 PT.

For those unable to attend the NAL events, tune in to live action of all fourteen of the Longines FEI World Cup™ Jumping North American League qualifiers on FEI TV, the FEI’s official video platform: www.feitv.org. The additional FEI classes at these competitions will be available to view via livestream on the FEI’s YouTube channel. Visit www.youtube.com/user/feichannel to view the full details on the livestream.

A total of 14 athletes from the new North American League will qualify for the prestigious Longines FEI World Cup™ Jumping Final.

The top seven athletes from the East Coast US, top three from West Coast US and the two best-placed athletes from Canada and Mexico will qualify for the Final, alongside winners of the 13 other leagues from around the world.

The North American League boasts a minimum of US $2.4 million prize money across the series, and offers the best Jumping athletes from North America and around the world the chance to qualify for the jackpot of more than US $1.4 million (€1.3 million) on offer annually at the Final.

The new league was launched by Beezie Madden, the most decorated US female equestrian athlete of all time, American Gold Cup winner and FEI Solidarity Ambassador Jessica Springsteen, and Hannah Selleck, team and individual gold medalist at young rider level and one of the sport’s up-and-coming stars. Full launch release here: https://goo.gl/kCIsyW