East Dorset, Vermont – Competition during week three of the 2016 Vermont Summer Festival was highlighted by World Championship Hunter Rider (WCHR) qualifying opportunities for hunter riders hoping to compete at the WCHR Finals. The Vermont Summer Festival runs for six consecutive weeks, from July 5 through August 14, at Harold Beebe Farm in East Dorset, VT.
The WCHR program was founded in 1992 to recognize and celebrate the hunter rider. Since the inaugural WCHR Professional Finals in 1992 the WCHR program has expanded to include coveted year-end awards for professionals, developing professionals, amateur owners, adult amateurs, juniors, children’s and pony riders.
Each year, after gaining points at member horse shows across the nation, including the Vermont Summer Festival, the top ten nationally-ranked riders and top six regionally-ranked riders in each category go head-to-head in the WCHR Finals at the Capital Challenge Horse Show in Upper Marlboro, MD.
Vermont Summer Festival horse show manager, Billy Glass, played a pivotal role in developing the WCHR program more than a decade ago, and is proud to have Vermont included as a member event. This year, Glass noted the high caliber of hunter riders and horses that travelled to Southern Vermont for WCHR qualifying.
“I was so pleased with the quality that we saw this year,” said Glass. “The horses were some of the nicest we have seen here in Vermont. In particular, the 3’3” pre-green horses were impressive. It’s an honor to host riders and horses who have their sights set on making an appearance in the WCHR Finals, and I look forward to seeing them at Capital Challenge.” 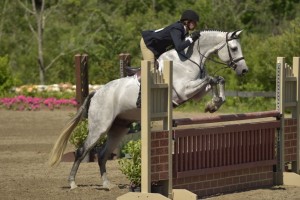 Jennifer Bauersachs and Cleaveland competing at the Vermont Summer Festival.
Photo by Andrew Ryback Photography
Two professional riders who returned to the Vermont Summer Festival this year in search of WCHR points were Jennifer Bauersachs of Frenchtown, NJ, and Amanda Steege of Bedminster, NJ. Bauersachs had a banner week with champion ribbons in the High Performance Working Hunter Division, as well as the 3’6” Performance Working Hunter Division.
“Hunters are becoming more recognized with more people wanting to compete, and the WCHR program gives those riders a chance to excel,” said Bauersachs. “It’s an opportunity for someone who may not have multiple horses to be competitive. That’s the best part; if you have one good horse you can be competitive against the best riders in the country. It’s feasible for anyone.”
While Bauersachs has qualified and participated in the WCHR Finals in the past, the top spot is an accolade she is still chasing.
“It’s at the top of my bucket list,” she said. “I would love to be able to win the professional challenge class someday.”
Steege made a return to Vermont this year, settling in for two consecutive weeks of competition after experiencing show management’s efforts to improve the facility and footing last year.
“After seeing the improvements last year, I was eager to book that second week,” said Steege. “My clients and I love this town, the weather, and the show. The management here always makes an extra effort to make the event feel special and it shows.”
After leading the WCHR northeast region for the past several years, Steege has come close to the top spot in the professional final, finishing fourth at the Capital Challenge Horse Show in 2015 with Zidane, owned by Susan Darragh. Steege admits that the WCHR is now the tool she uses to dictate her summer show schedule.
“WCHR selects member shows based on criteria that include footing, prizes, and how well the shows are run,” she said. “I feel that by going to WCHR shows, myself and my clients are going to nicest shows offered in our region.”
Steege’s team jumped to several tri-color ribbons during week three of the Vermont Summer Festival and has made it their goal to qualify for WCHR Finals at Capital Challenge. 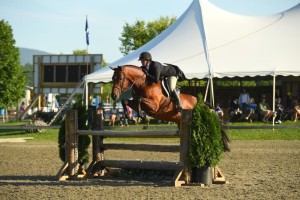 WCHR veteran competitor Amanda Steege, pictured riding Zidane, competing at the Vermont Summer Festival.
Photo by Andrew Ryback Photography
For over 20 years, the Vermont Summer Festival has attracted exhibitors and their families to the Manchester region in southern Vermont for great competition in an ideal summer setting. Outside the show ring, exhibitors enjoy the charm of Vermont’s shopping, dining, and outdoor activities.